Consistency is a new term for perfection. In fact doing anything good consistently over and over agin is often termed as perfection. In this endeavour, I stumble across a Seinfeld Strategy.

The story line goes like this, Brad Isaac was a young comedian starting out on the comedy circuit. One fateful night, he found himself in a club where Jerry Seinfeld was performing. In an interview on Lifehacker, Isaac shared what happened when he caught Seinfeld backstage and asked if he had “any tips for a young comic.”

Here’s how Isaac described his interaction with Seinfeld…

He told me to get a big wall calendar that has a whole year on one page and hang it on a prominent wall. The next step was to get a big red magic marker. He said for each day that I do my task of writing, I get to put a big red X over that day.

“After a few days you’ll have a chain. Just keep at it and the chain will grow longer every day. You’ll like seeing that chain, especially when you get a few weeks under your belt. Your only job is to not break the chain.”

Use it to Stop Procrastinating….

Top performers in every field — athletes, musicians, CEOs, artists — they are all more consistent than their peers.

They show up and deliver day after day while everyone else gets bogged down with the urgencies of daily life and fights a constant battle between procrastination and motivation.

While most people get demotivated and off–track after a bad performance, a bad workout, or simply a bad day at work, but the top performers settle right back into their pattern the next day.

The Seinfeld Strategy works because it helps to take the focus off of each individual performance and puts the emphasis on the process instead.

It’s not about how you feel, how inspired you are, or how brilliant your work is that day. Instead, it’s just about “not breaking the chain.”

All you have to do to apply this strategy to your own life is pick up a calendar (here’s an inexpensive one) and start your chain.

Just A Word of Caution….

There is one caveat with the Seinfeld Strategy. You need to pick a task that is meaningful enough to make a difference, but simple enough that you can get it done. Similarly, it sounds great in theory to be able to deadlift like a maniac every day, but in practice you’ll probably be overtrained and burnt out. So step one is to choose a task that is simple enough to be sustainable. At the same time, you have to make sure that your actions are meaningful enough to matter.

For example, doing 2 exercises or 10 pushups per day could be simple and meaningful depending on your level of fitness. It will actually make you stronger. On the contrary, reading a fitness book each day is simple, but it won’t actually get you in better shape.

Another way of saying this is to focus on actions and not motions, which is a concept that James Clear has explained in this article: The Mistake That Smart People Make

So often, we assume that excellence requires a monumental effort and that our lofty goals demand incredible doses of willpower and motivation. But really, all we need is dedication to small, manageable tasks. Mastery follows consistency.

Follow the Seinfeld Strategy to maintain consistency. Each action becomes a small vote that tells your mind, “Hey, I believe this about myself.” And at some point, you actually will believe it.

Let me know what you think about ? I’d love your feedback. If you haven’t already then sign up for ‘SUNDAY RETAZO’, a weekly dose just like this.

Credit:- Photo by JESHOOTS.COM on Unsplash

THINK OF SUNDAY AS YOUR LAUNCH PAD 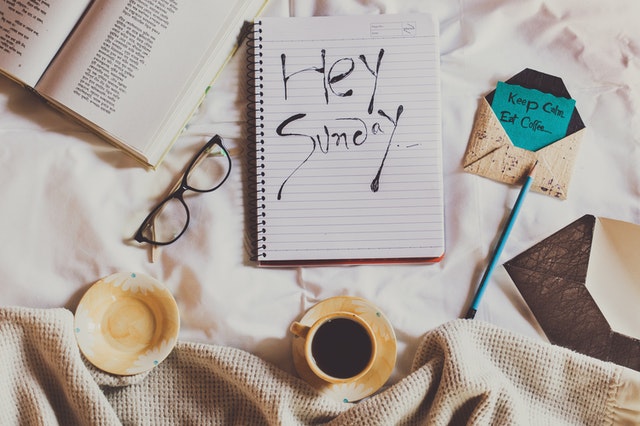